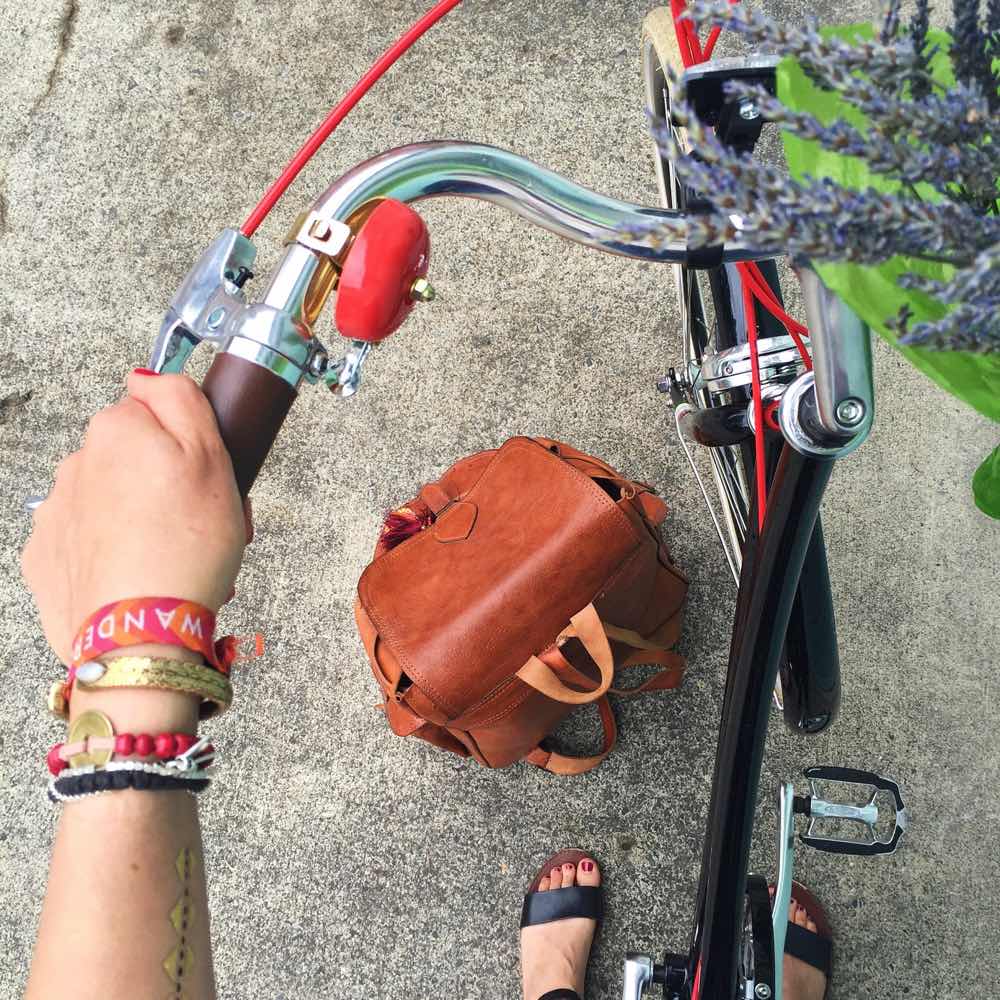 Put them worries on the shelf, learn to love yourself

Portland is (surprisingly) a relatively small place that is divided into four quarters – NE, NW, SE, SW – for ease of navigation. Hop on a bike to freely explore the food adventures that await you across the twelve bridges, but also make time to take in the natural beauty of Oregon’s main city. Walking around each neighbourhood is also a great way to spend an afternoon – look out for back alley blackberry bushes, overhanging fig trees and sidewalk plum shrubs.

To get quickly acquainted with the rhythm of the city, pick up a copy of the Portland Mercury – a wry weekly local newspaper that makes fun of itself while reporting on current zeitgeists. Also look up the Willamette Week for music events and cultural happenings around town.

After a few days in Portland you will start to notice certain quirks – like how you can’t pump your own gas here. You might hear conversations around how Oregon wishes it were it’s own country. The topic of polygamy pops up often.  There’s a feeling that locals would happily change the tagline of the city to: Portland – Why Would You Ever Leave?. And I swear the rains smells like almond butter.

But it’s not always sunny in Portland – there is an emerging disparity between struggling millennials, locals who remember a time before food carts and homeless tent camps, and an up-and-coming younger affluent liberal arts class. Tech start ups are thriving in Portland and so are the IT intelligentsia who have moved into town. They disapprove of standing in line for anything; like the nation’s top Thai restaurant (Pok Pok) and ridiculously gourmet ice cream (Salt & Straw). Despite this, the community identity of Portland feels resilient and authentic with the ‘G’ word (gentrification) not appearing as rampant as it does in the rest of America.

I won’t mind if the U.S only has 49 states – as long as I can still get a decaf almond milk iced latte with local rooftop honey and wildcrafted cinnamon without a hint of irony. 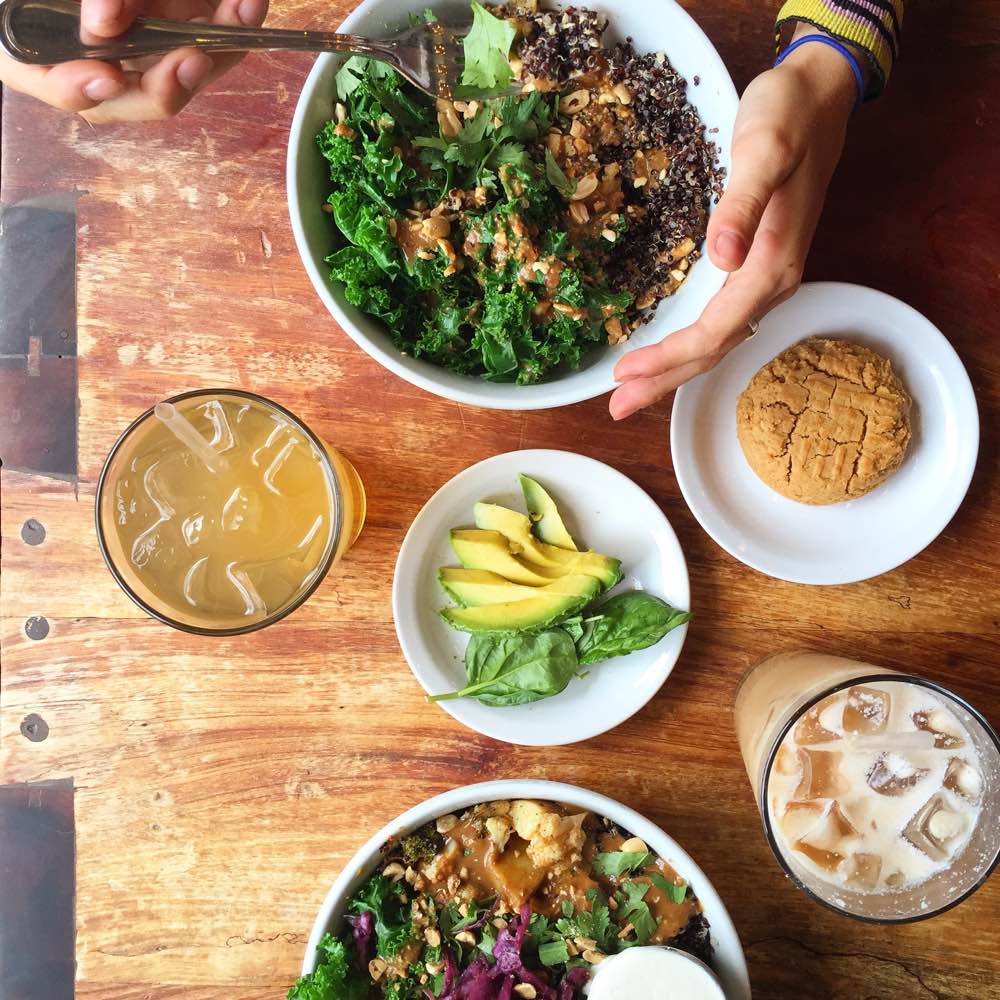 A gluten free and vegan cafe inside Yoga Pearl with sunny window seats and an inspiring wellness-focused menu. A perfect lunch spot with two Buddha bowls, obligatory side of avocado, a peanut butter cookie and a 90s feminist soundtrack. Try the homemade almond hemp milk in a dirty chai. 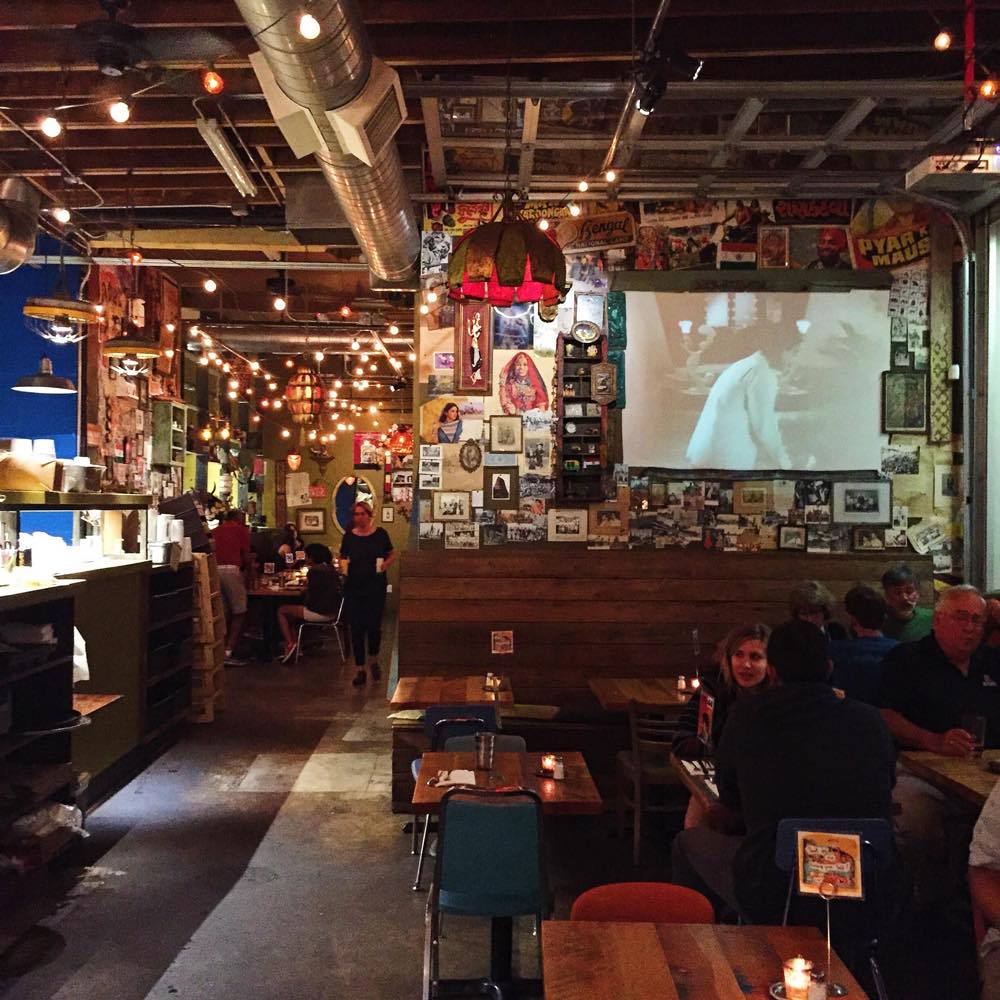 Inventive and damn tasty Indian street food – the kind of place I could eat at every other day. Black and white Bollywood films play as candles twinkle and delicious dishes are devoured at the speed of light. Sharing is the name of the game – try the Bhel Puri, Dal and Coconut Curry, Aloo Tikki potato patties, and a myriad of sides such as Okra, Beets and Sambar. 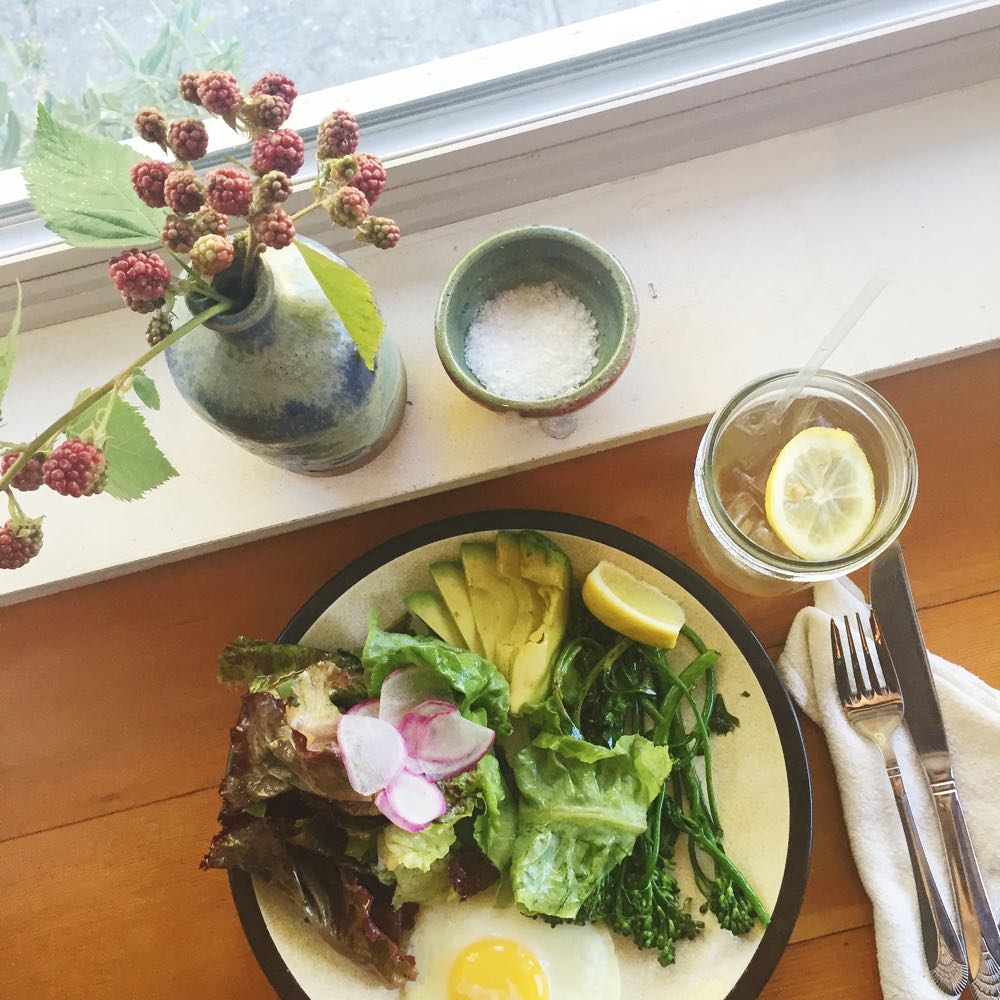 A fun-to-say cozy cafe in North Portland with an attention to detail for all local produce and fabulous baked goods. Order the Bakers Breakfast or Sweedeedee Breakfast plate and you’ll be eating the best of the season. I was eyeing off pretty much every counter treat, and if you can eat gluten – don’t go by without trying a slice of salted honey pie. 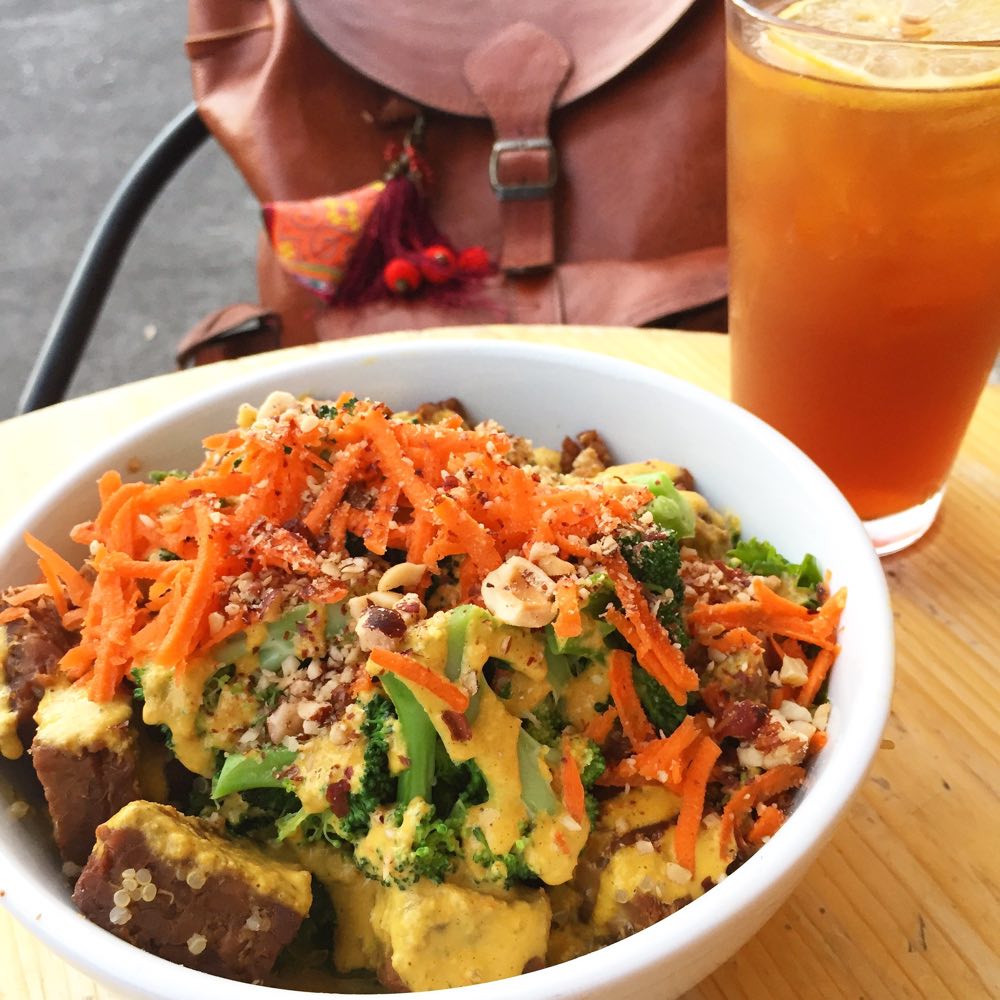 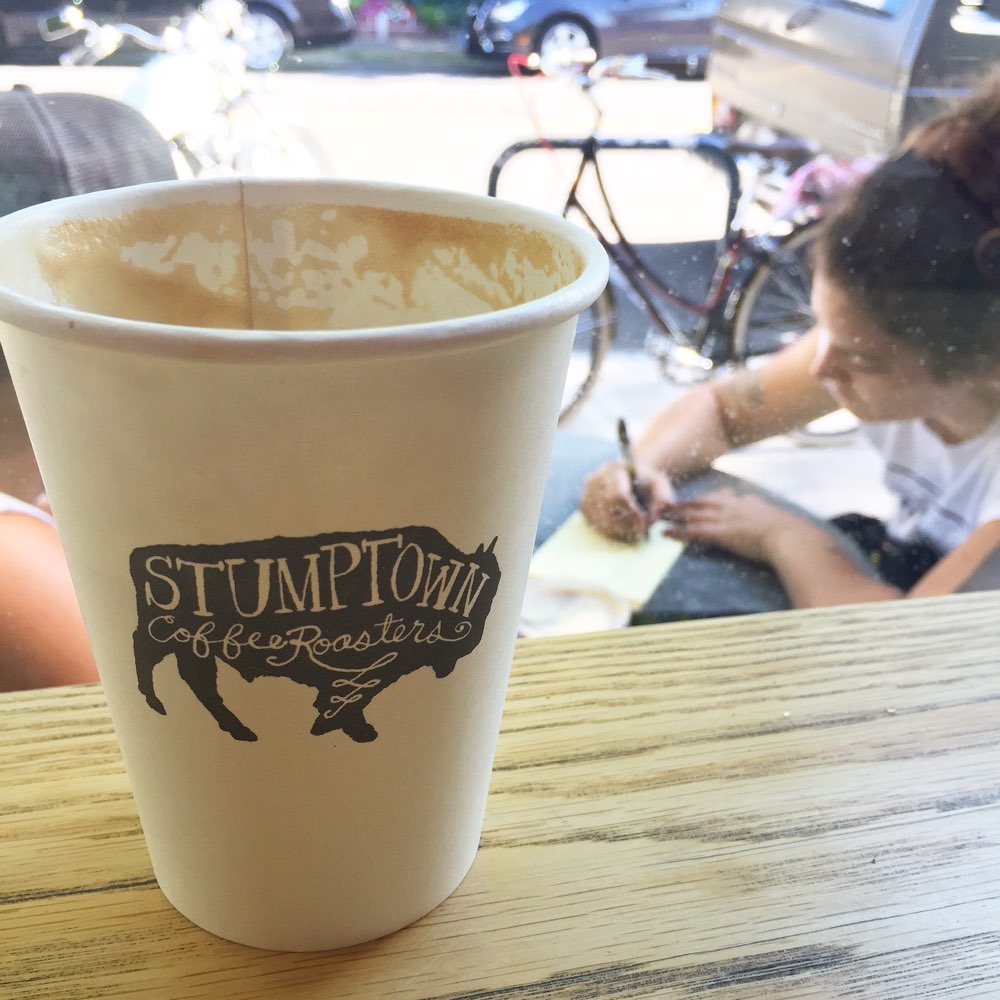 Love, love, love this place. I was prepared for the coffee with widespread allegiance across America to not live up to the hype – but it actually did. Stumptown Coffee originated in Portland and the flagship cafe on SE 45th and Division is definitely worth a visit. 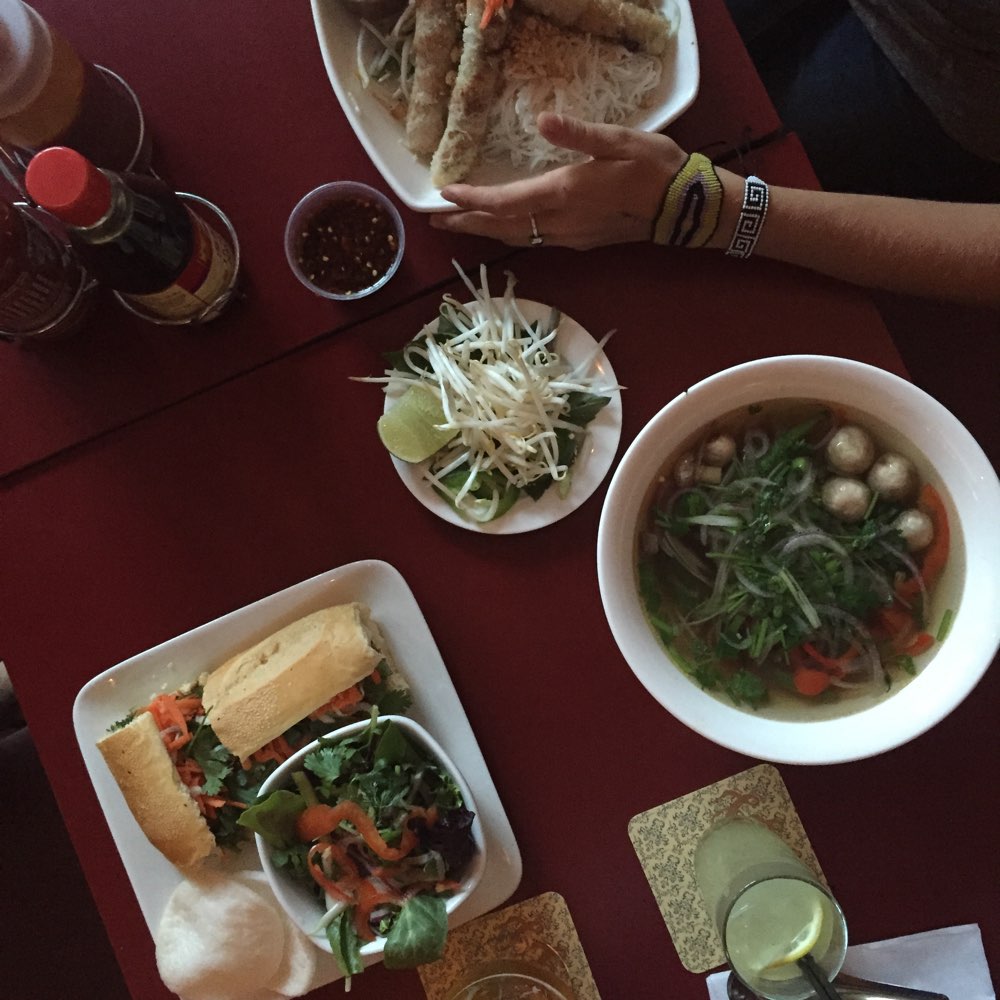 The call for (vegan friendly) pho is hard to ignore – and cravings were satisfied in one fell swoop at the discovery of Lul Lac. An impressive centre bar and buzzing atmosphere set the scene for delicious South East Asian fare. The lines are always out the door, so put your name down, get a drink at the bar and you will be in broth land in no time. 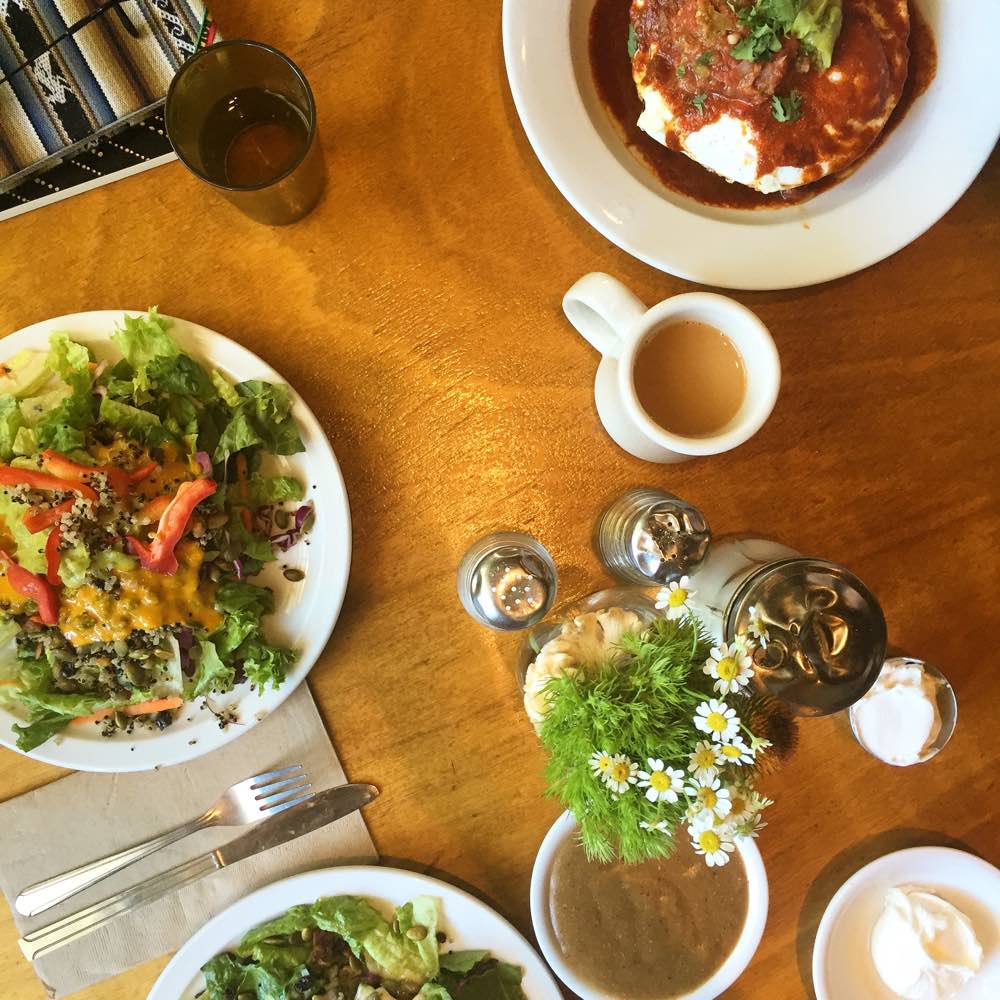 A charming retro diner that serves vegan, vegetarian and gluten-free comfort food in NE Alberta. I was craving a salad, and a huge pile of vegetables, quinoa and toasted seeds is what I got. The staff are really friendly and you can request to see a ‘secret book’ that lists the ingredients in every menu item (genius!). Please do order a side of almond gravy. 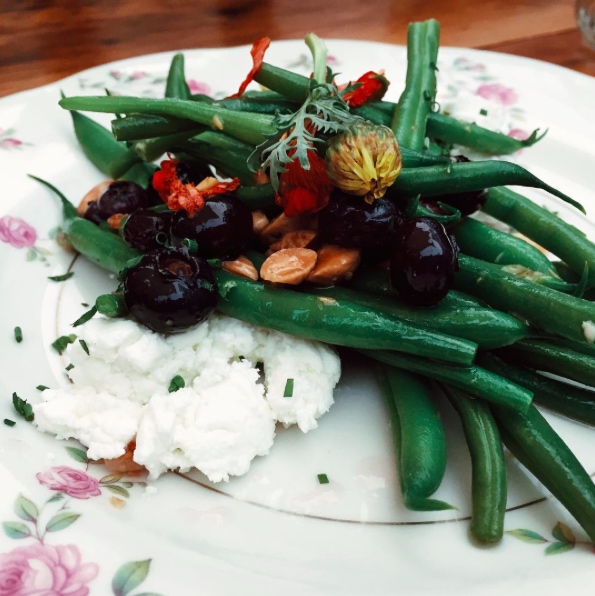 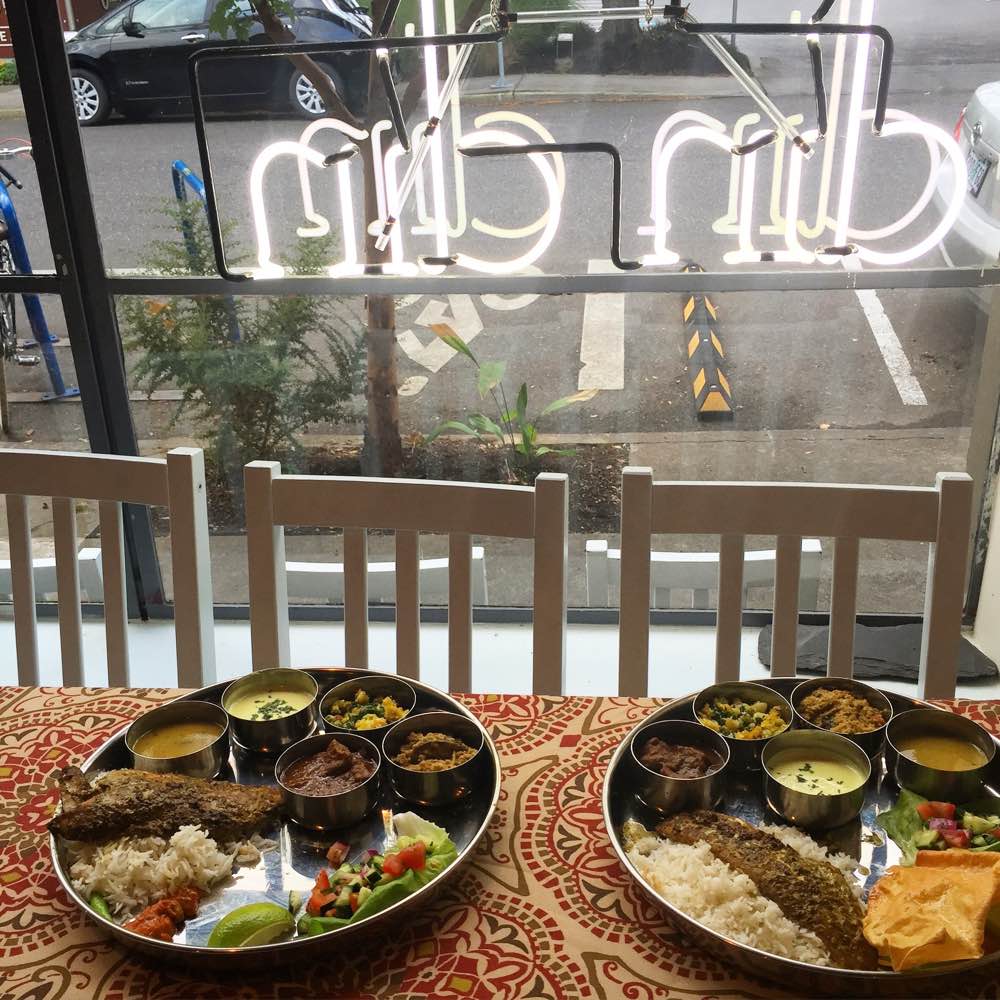 An unforgettable night combining my two favourite things – communal dining and authentic Indian food. Thali Supper Club is hosted by the sweetest couple Leena and Joe Ezekiel at Din Din – a cozy pop-up space. Each supper has a food theme from a subcontinent of India – in my case it was ‘The Deccan Queen’ featuring regional dishes from Maharashtra. We feasted on Mumbai cuisine like Mas Kalvan coconut fish, Bhareli Vangi eggplant and sesame, and Shrikhand – a yogurt, saffron and cardamon dessert.  I’ll be recreating the thali round tray concept at home! 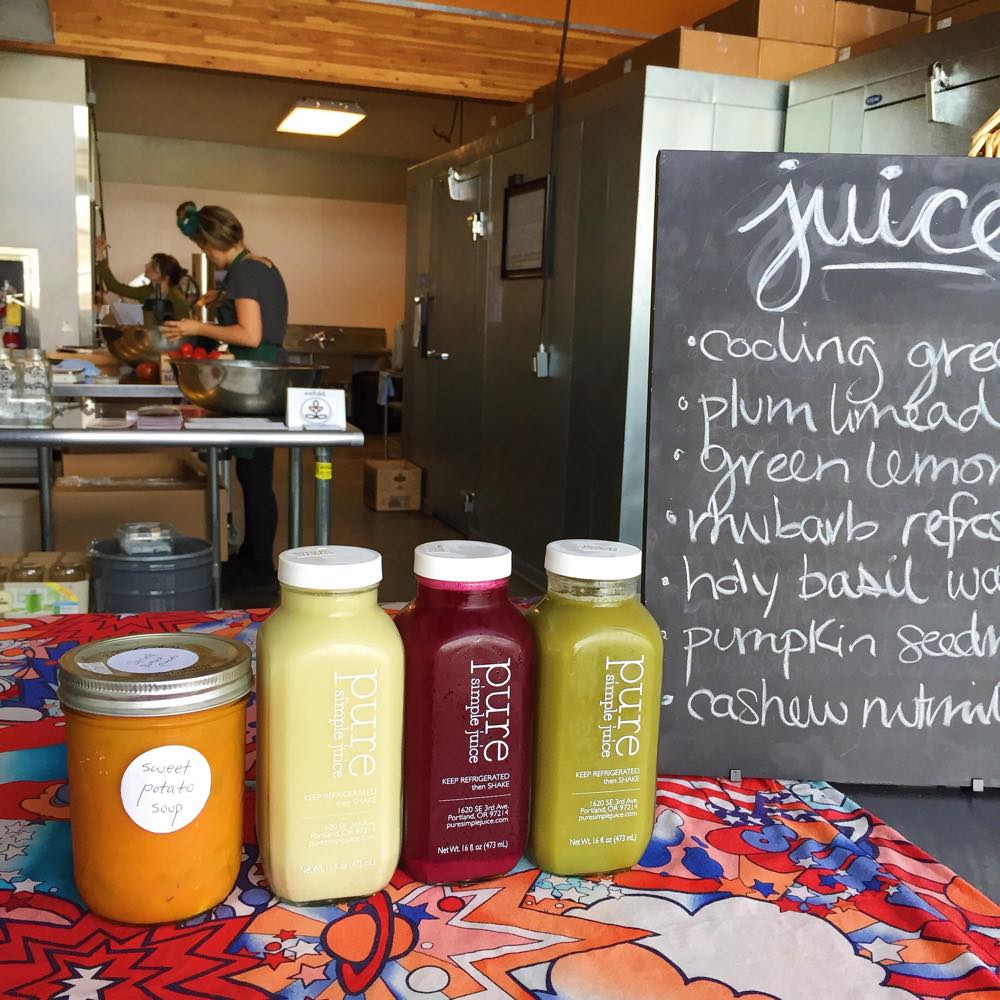 I discovered this beautiful local juicery at the PSU Farmer’s Market and then rode my bike to their shop (it’s a little out of the way in an industrial area) to stock up on cold-pressed juices and and a cleansing sweet potato soup. The star attraction is a delicious Sprouted Pumpkin Seed Milk with date, maple syrup, spices, and himalayan sea salt. 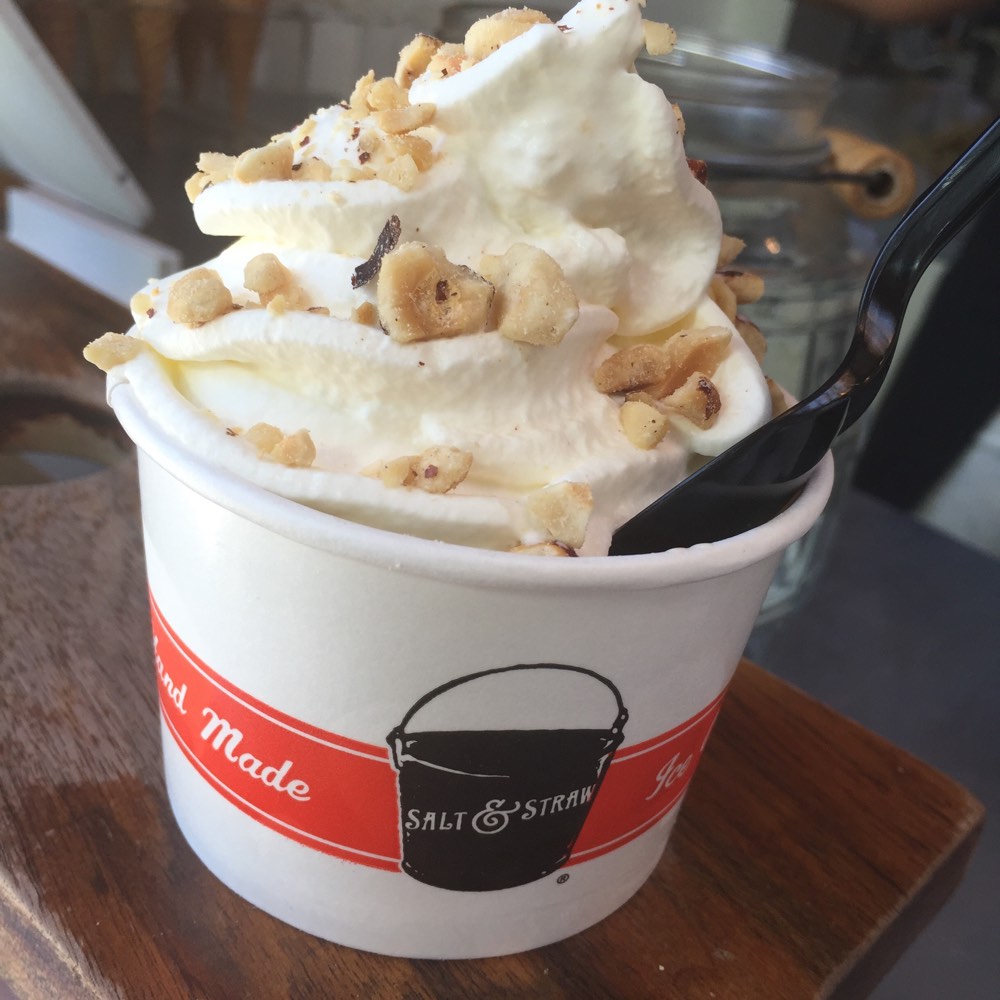 Believe the hype but be prepared to wait (think: new Apple product release lines) to get a taste of Oregon’s best ice cream. Vegans rejoice – you are cared for here. I devoured the glorious food romance between pie and icecream with the NW Wild Berry Pie flavour (vegan coconut milk and chunks of gluten free wild berry pie). Other scoops to double your work out for are: Almond Brittle with Salted Ganache, Pear and Blue Cheese, Strawberry Honey Balsamic with Cracked Black Pepper and Stumptown Coffee with Burnside Bourbon. 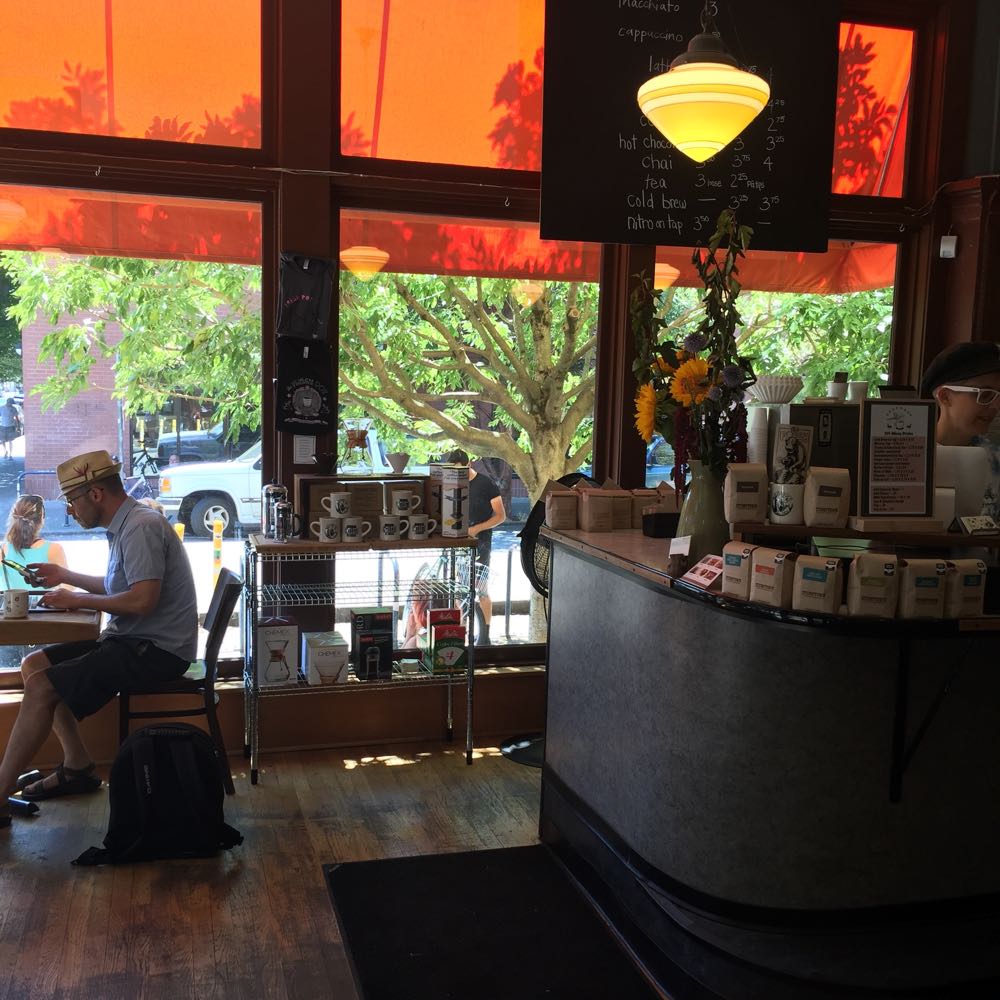 A quirky, independent coffee shop with three locations in Portland – I visited the Mississippi location because it was used as the coffeeshop in the film Feast of Love. Be romantic comedy ready as you sip your locally sourced coffee in a sun-dappled windows seat waiting for your ‘cute-meet’ moment. Or just enjoy the free WiFi and cool vibes. 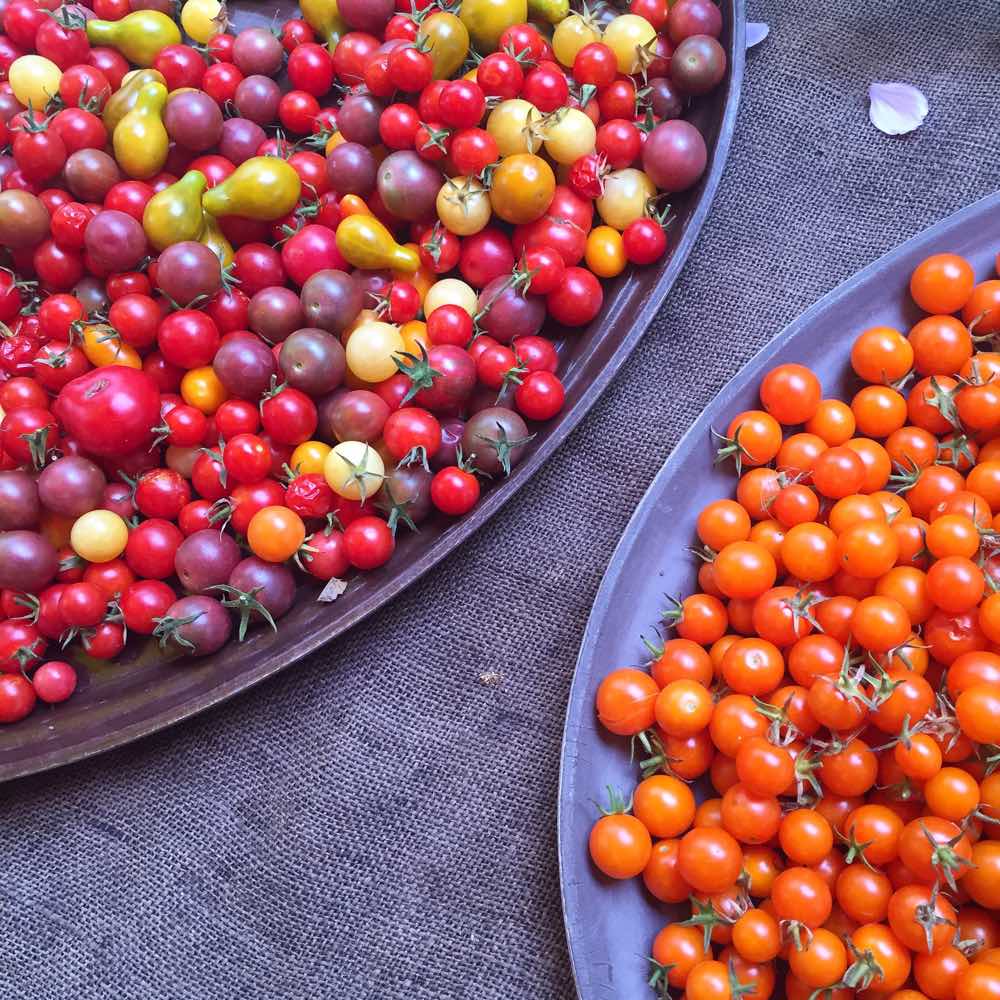 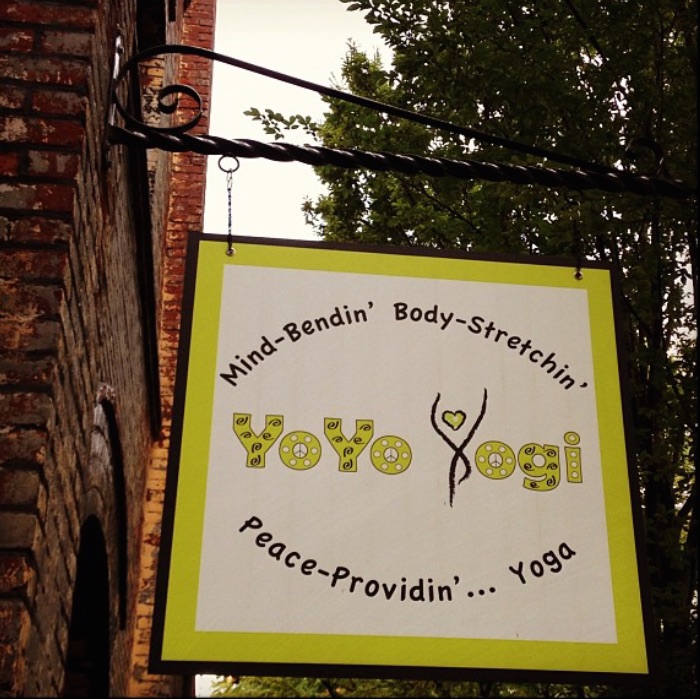 Named as one of the ‘Top 10 Yoga Studios In The Nation’ for good reason – a two storey building with a yoga wares shop and a large change room with tea and stretching area on the ground floor. Upstairs is the studio with candles, intimate surroundings and great teachers – the ‘Soul Shakin’ at 8.30am Sunday morning with Alex is a Portland institution with an awesome soundtrack, sweaty vinyasa and philosophical musings. I’ve heard that the ‘Yin Yogaaaaah’ class with Quinn is excellent too. 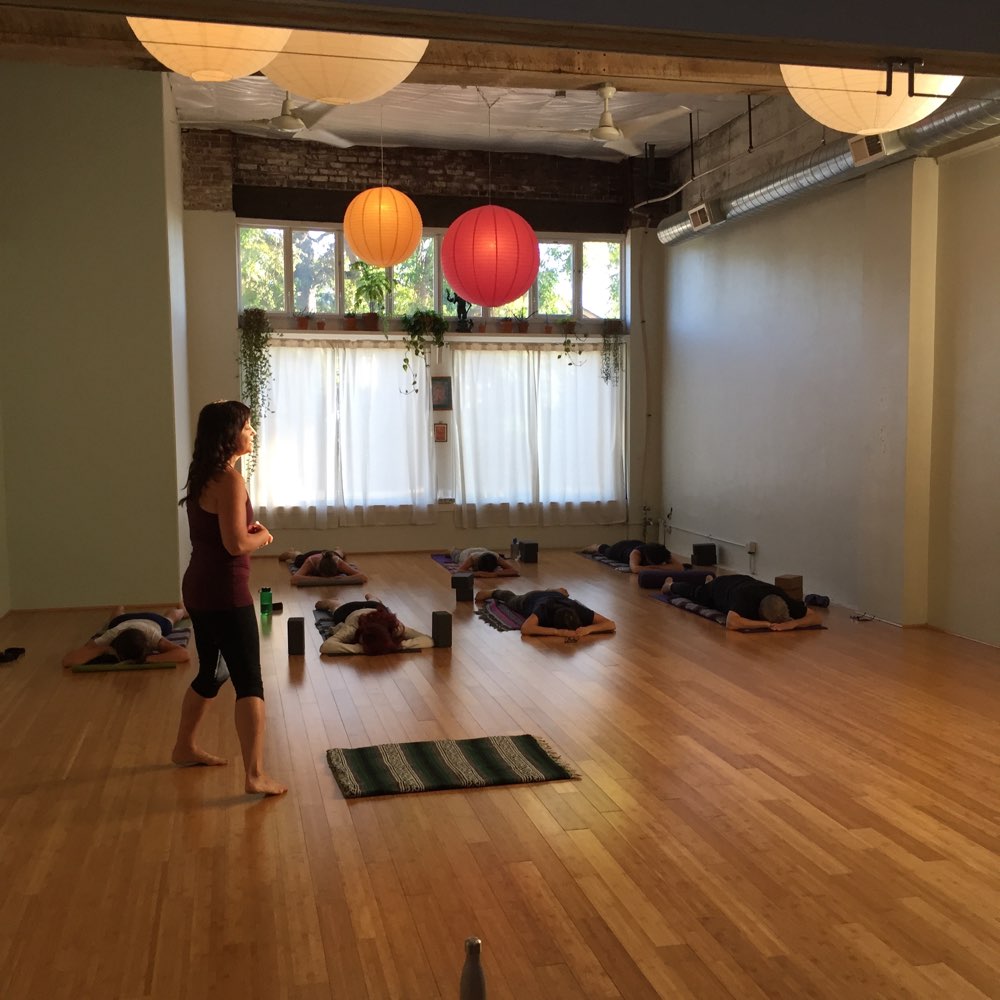 A light-flooded space with greenery that instantly makes you feel welcome and inspired. The People’s Yoga is a friendly low-cost yoga community with three studios in Portland. I wish the NE Killingsworth studio could be my ‘local’. 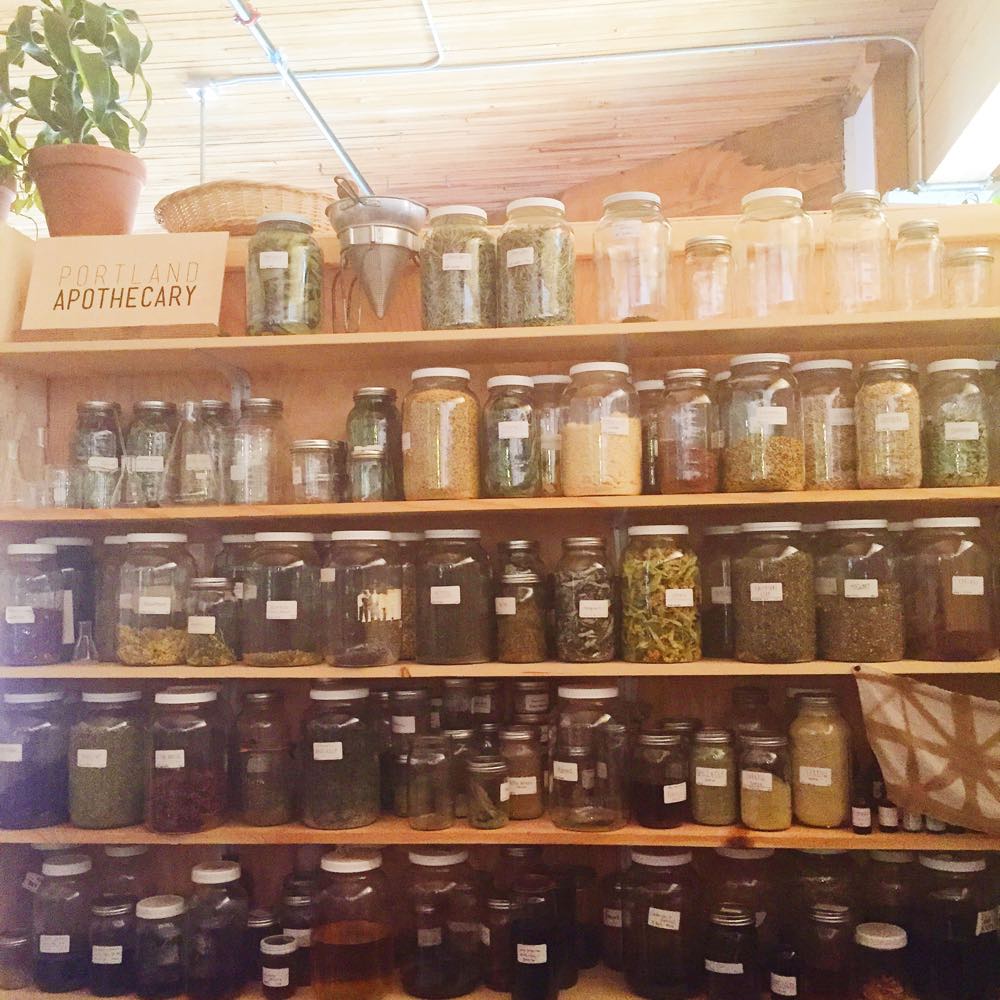 A holistic and healing botanicals haven that uses ingredients from the Pacific Northwest to create wellness remedies. Email ahead to request a studio tour to see the enviable wall of plant medicine jars and meet the botanicalists. I picked up the Nourishing herbal tea blend, Love and Grounding ritual misters, Rose and Cardamon infused honey, Ashwagandha Roots drops and Gomasio seasoning. 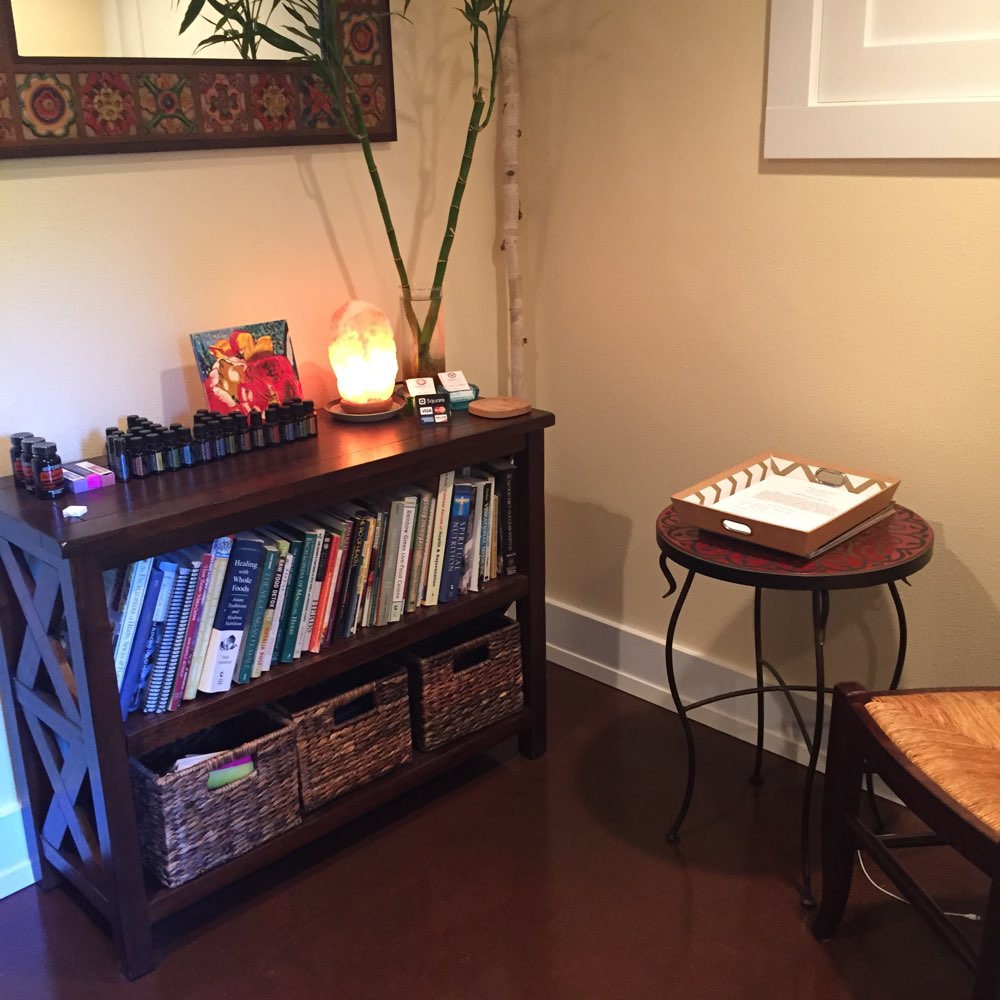 Travel can cause chaos with your natural body rhythms and digestion – and an act of self care can do wonders to restore you back into balance. The most profound wellness experience of my travels has been a gravity-centred colonic in Portland. The owner Alec is a gifted healer and a magical human. The treatment takes place in a basement room surrounded by crystals and good vibes – it feels comfortable, professional and cozy. Alec guides you throughout the 90 minute session, even setting a beautiful intention at the beginning that came true – I felt lighter, stronger, and more confident. I returned again and am very grateful to Alec – Portland; you are very lucky to have him! 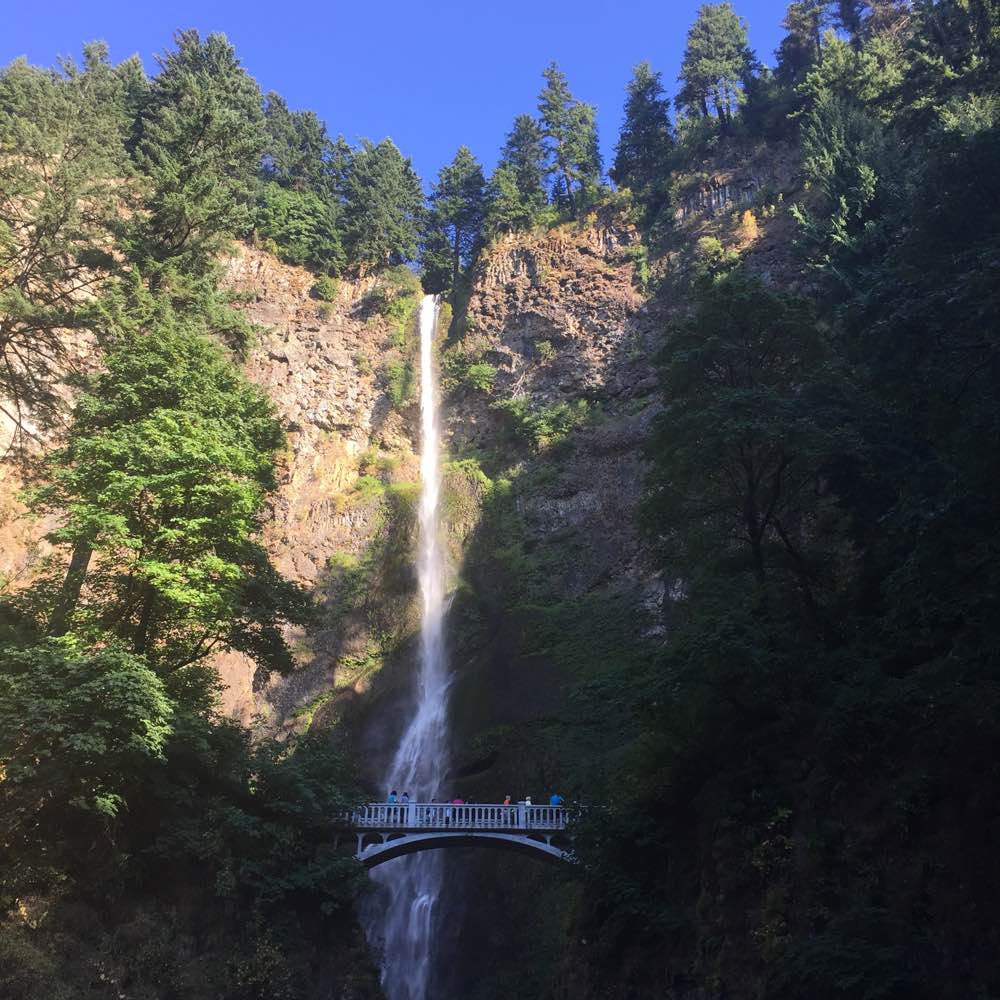 A 30-minute car ride outside of Portland (there is no public bus service out here) is a jaw-dropping waterfall in the woodlands of Oregon. Take a short hike on the Horseshoe Tail Falls trail to get behind the cascading water. As expected, Multnomah Falls are extremely popular with tourists so get in line for your obligatory ‘I’m on a suspended bridge in the Pacific Northwest’ shot and then go exploring in the opposite direction. 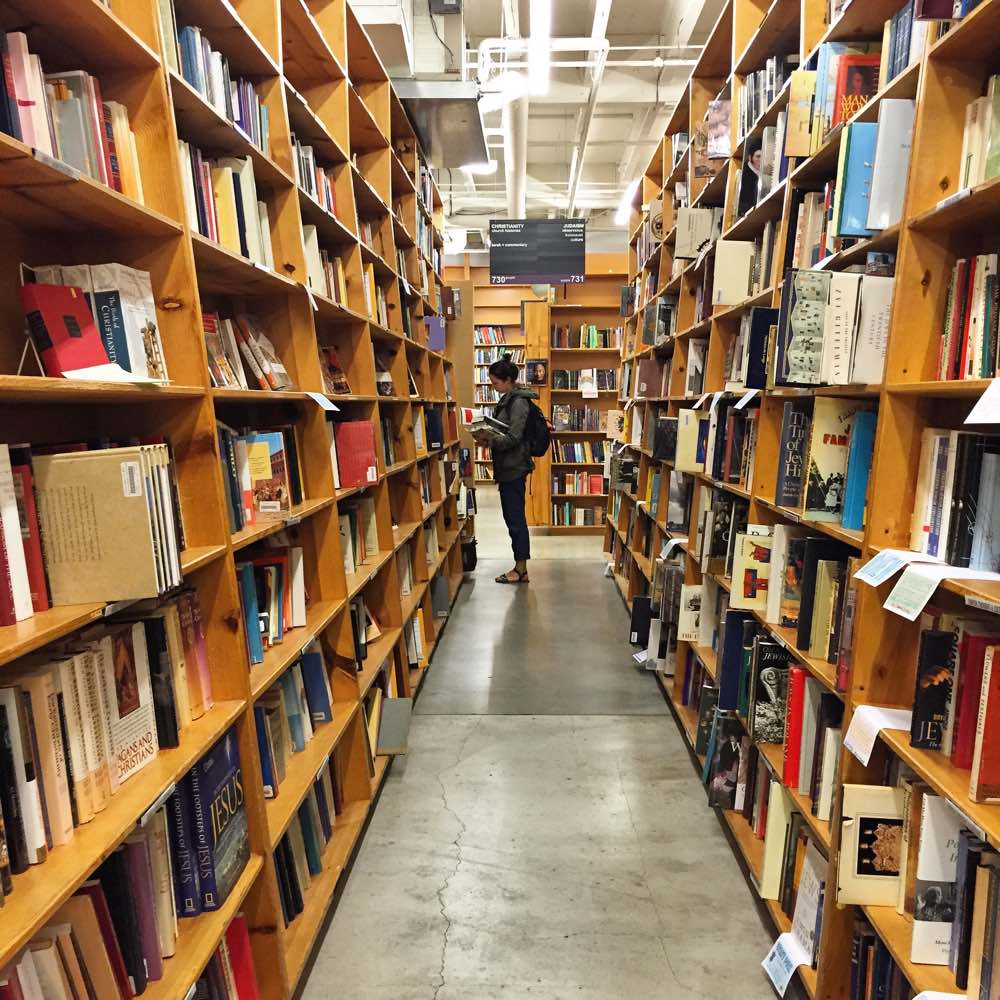 An absolute must-visit in Portland is Powell’s Books – said to be the largest new and used bookstore in the world. It feels like an old-fashioned yet modern kind of place in that you can be left alone to browse for hours, but also the book wizards can help you find pretty much anything printed in history with the click of a button. Check out the cafe and quirky book sections on every floor, and expect sore arms from carrying too many books – the best kind of feeling really. 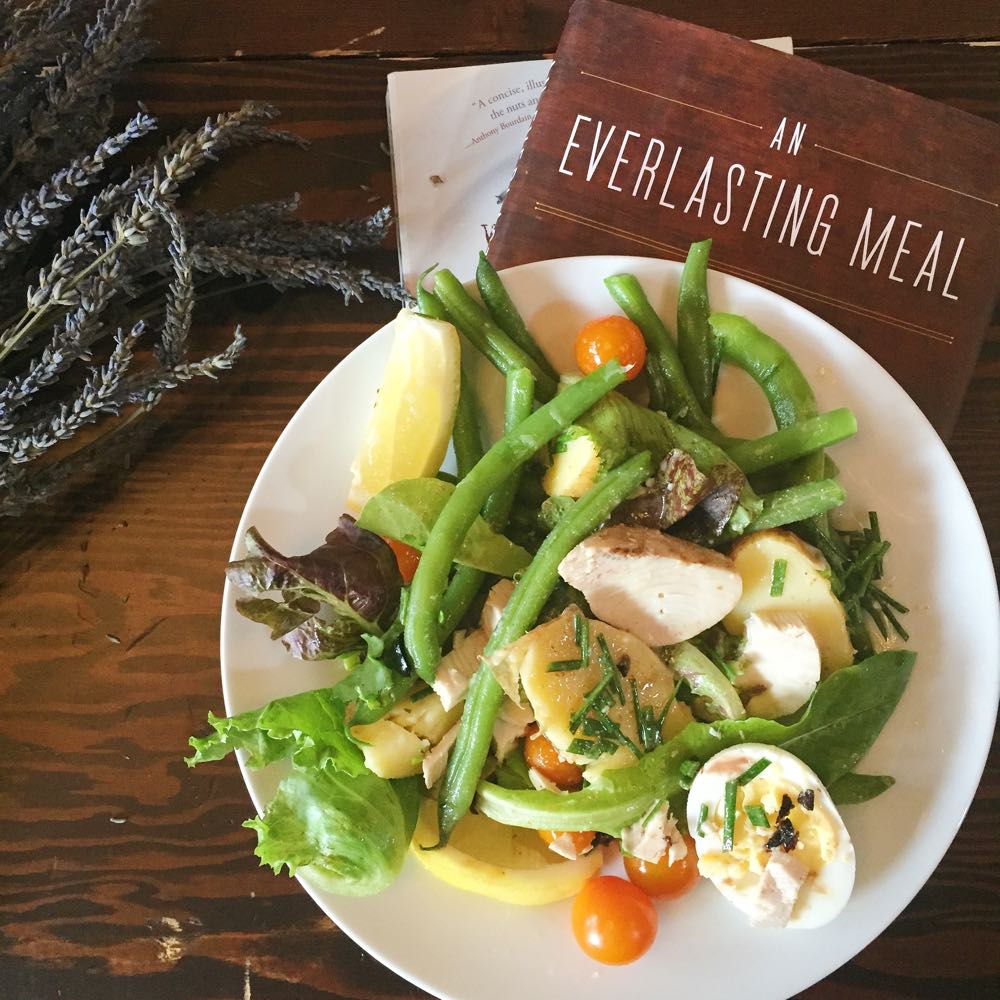 I always looks out for creative workshops in each city I visit, and I found a perfect opportunity to hone my food writing and photography skills while in Portland. Elder Hall is a quaint community kitchen space behind Ned Ludd that I’d happily move into, tomorrow. I attended a Food In Words workshop led by Camas Davis (former editor of Saveur, Portland Monthtly, and now the founder of Portland Meat Collective and currently writing her own memoir) – that kicked off with a yummy breakfast (granola, blueberries and homemade hazelnut milk!) and hours of talking about food, food and food! We put talk into action by using the muse of our delicious niçoise salad lunch.  I learnt a lot about authenticity and personal voice, and also a magical concept called service journalism that inspired me to rethink how I share my love for food and travel.