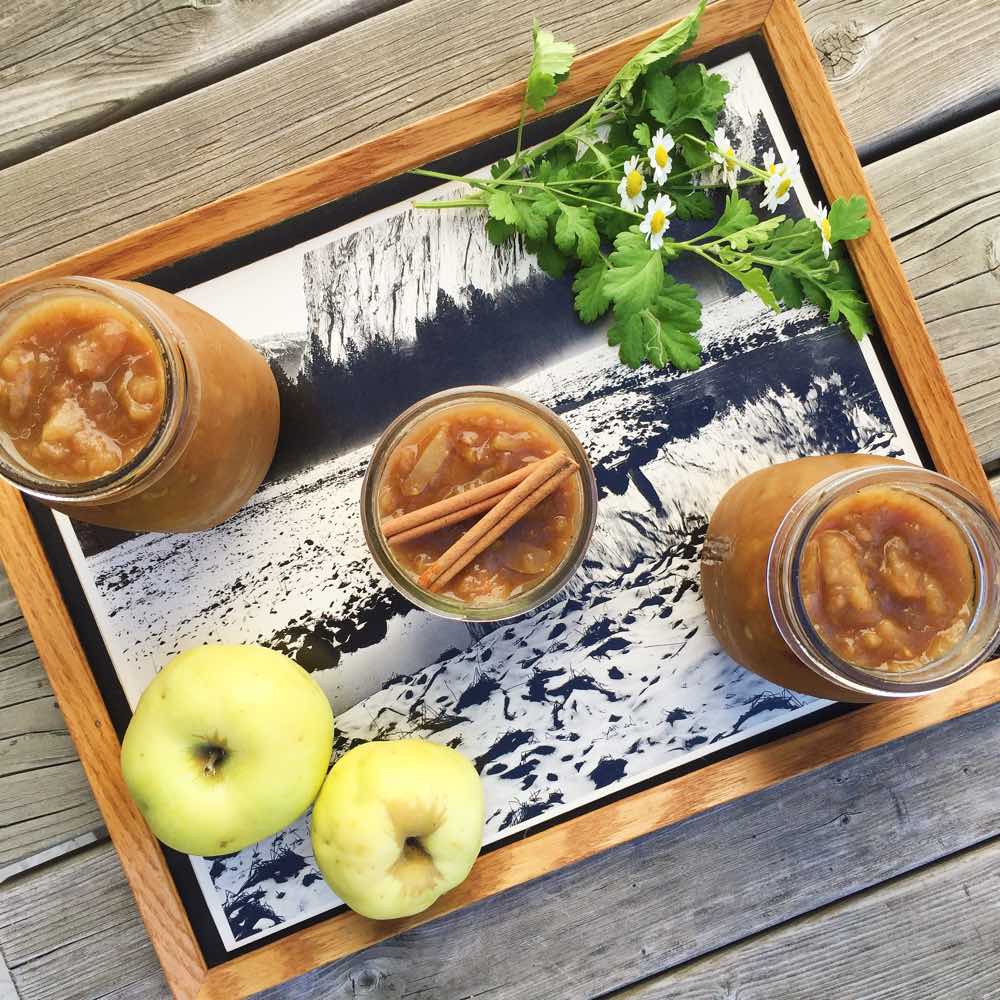 Where You Lead, Carole King

Gluten free, vegan (inspired by She Who Eats)

You can’t beat the magic of apple and chamomile, especially when it tastes like apple pie in a jar.

After the wondrous adventure of finding a giant apple tree in my Toronto neighbourhood, I had to commemorate that day (and the four bags of organic-as-it-gets apples) into a jam. It seemed such a waste to throw out the apple skins so I sliced them and added them halfway through the simmering process like you would normally do with orange peel. The result is comforting apple-y marmalade compote with a subtle twist from the freshly steeped chamomile flowers.

As with any ‘slow’ food – it is a labour of love, so don’t rush the process (it took me a whole day, in between comings and goings). Also, it’s best to tell you now: the apple skin slicing park takes forever so put on a lingering album like Carole King ‘Tapestry’ to keep you company.

A humble apple tree taught me that if you have two legs, a ladder and an adventurous spirit – you don’t have to book a plane ticket to travel. You can take twelve steps out your door or walk twelve blocks into a new corner of your neighborhood and simply look up. All the while there may have been a huge overflowing apple tree, a flowering thyme bush (perfect with eggs) and a blooming chamomile bush in your own backyard.

Travel is about looking above the sight line of ordinary life. On the surface, everyday life can sometimes feel like it has lost its glean. But really, the streets where you live are a world of culinary discovery. What if I told you there are diamonds buried in your backyard? You would surely not even wait for this sentence to be over. You would run past your computer to your back door and start digging. Go forth (and make marmalade)!

Peel apples (don’t throw, set aside) and into quarters.

Place apples in a large pot with 1.5 litres of water and 2 cups of brewed tea. Bring it to a boil and simmer for 30 minutes over low heat.

Remove apples from heat and drain with a strainer to let cool slightly. Keep liquid and set aside. When apples are cool enough to handle, mash roughly. Set aside.

Place the sliced peel in a large pot and fill with 1.5 litres of water. Bring to a boil and simmer for about 30 minutes over low heat. Remove from heat and drain with a strainer.

Combine the precooked apples, sliced peel and the reserved juice in a pot. Add cinnamon sticks and 2 cups of steeped chamomile tea.

Add more or less sugar based on your sweetness barometer. Keep on gentle simmer as you do not want to break your own heart with burning sugar.

Skim the surface as you go and stir constantly.

Wait for liquid to reduce to one-third and become slightly thick (Like magic, this is the time I appreciate science).

Remove and discard cinnamon sticks. Leave marmalade to cool down, for about 15-30 minutes.

Meanwhile rinse clean jars and lids with boiling water and leave them to dry. Fill the jars with marmalade, cover with lid and store in refrigerator for up to one month.

Sterilise glass jars and lids in boiling water before filling with marmalade.

Due to the low sugar content, the shelf life is short so eat quickly and share widely.

Go apple picking in your neighborhood or road trip to an orchard. It really does add to the sweetness of the jam.

I used ginger gold apples but find any seasonal green apple that is crisp, sweet and slightly tart.

The best part was sharing the marmalade – surprise a neighbour, friends or a fellow foodie.

If you don’t have fresh chamomile flowers (it was the first time I had seen a flowering bush!) then use loose leaf tea or good-quality tea bags.